Should Pets Be Allowed in Bed: The Definitive Answer

Anyone who knows me knows that I am slightly (mostly) obsessed with animals. One of the first things I do when I get home is to take my darling puppy Juju for a walk in the park in order to unwind and watch other pet owners with their furry friends. Occasionally I’ll take a trip to the pet store, because it makes me feel happy, especially after a stressful day at work. So, it should come as no surprise that I have extensive knowledge on the sleep habits of animals, as it combines my two favorite subjects! If you are like me and previously recorded episodes of animal documentaries, then sit back and get comfortable because we are going to explore the wild and wacky sleep behaviors of five different species.

Chimps really like to sleep with a view. Their dream pad is high up in the trees where they make their “mattresses” out of branches and leaves. Being high up prevents them from being attacked by predators and gives them the opportunity to sleep peacefully for over 9 hours a day, which is way more than many humans get! When I called the chimp nest a “mattress,” it isn’t that much of an exaggeration. Chimpanzees are notorious for being very picky with both their sleep location and their nests. In order to past the test, trees need to be particularly sturdy as to not buckle under the weight of the animal. Next, chimps painstakingly break and bend branches and sticks while combining them with foliage to produce a thick, springy structure that is reminiscent of a mattress. With such attention to detail, it is no wonder why chimpanzees are the animal kingdom’s equivalent of the “Princess and the Pea.” 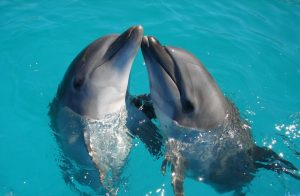 Sleeping as a dolphin sounds like hard work. Dolphins must keep one side of their brain awake in order to continue breathing. They sleep with one eye open (not unlike my own mother…), which helps them to also escape from predators and from drowning. After around two hours, the different sides of the brain will alternate being asleep and being awake, undergoing what is known as unihemispheric sleep. Dolphins also sleep close to the surface, often in a motionless state, and take breaths periodically when needed. This type of sleep allows dolphins to maintain slight muscle movements that aid in keeping the warm-blooded mammal alive especially in icy cold waters. 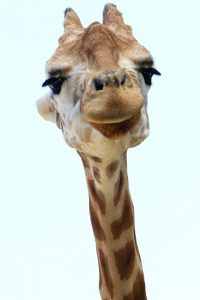 Giraffes are the original power nappers. Every minute spent asleep is a possible risk in the savanna. There is a long list of predators for the giraffe, and because of this, they usually get about 30 minutes of sleep a day often in 5-minute intervals. You may catch a giraffe sleeping on the ground with their head laying across its back, but often, giraffes sleep on their feet, ready for an escape. It is probably a good thing that the giraffe needs only about half an hour of sleep, since bending its neck across its back is bound to be an uncomfortable sleeping position. Standing back up also seems to be an issue sadly. I wonder if they ever wake up with pain in their necks. 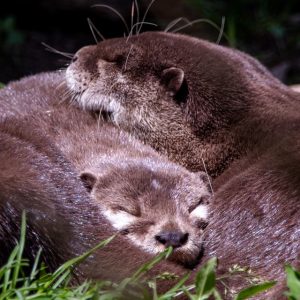 Sea otters win the prize for cutest sleep habit. They can be found floating in pairs or in groups while asleep on their backs. Usually sea otters fall asleep “holding hands” with others around them to ensure they that do not drift away from the group. Creating what is known as an otter raft, is what keeps the species safe from predators while on the snooze cruise. Mothers might also choose to wrap their pups in seaweed so that they are not taken away by stronger currents when in a deep slumber. Honestly, I could stare at photos of sea otters holding hands all day long and never get bored. They are just so cute! 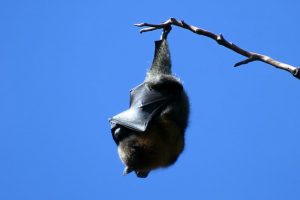 Bats are probably the most notorious species of animal known for having an interesting sleep habit. We all know that bats sleep upside down, but do you know why? Bats have extremely powerful claws that allow them to lock themselves into place while hanging. When they hang, they are not using any energy to keep them in place; they let gravity do all the work. It would actually require them to use more effort to stay right-side up. Sleeping upside down also provides them with the perfect position to fly away in case a predator invades their sleep quarters, since they can just drop from the supporting structure and quickly spread their wings. Bats also are hibernating animals with high metabolic rates. Skipping winter means they do not have search for food that is scarce while burning unnecessary amounts of energy. During hibernation, bats slow their heart rates, breathing, and metabolism. Skipping winter honestly doesn’t sound like a bad idea.

That wraps up our list of favorite animals with interesting sleeping habits. I don’t know about you, but all this talk of sleep has really put me in the mood for a snooze. I think Juju and I are going to cuddle for a bit underneath the sheets

Should Pets Be Allowed in Bed: The Definitive Answer